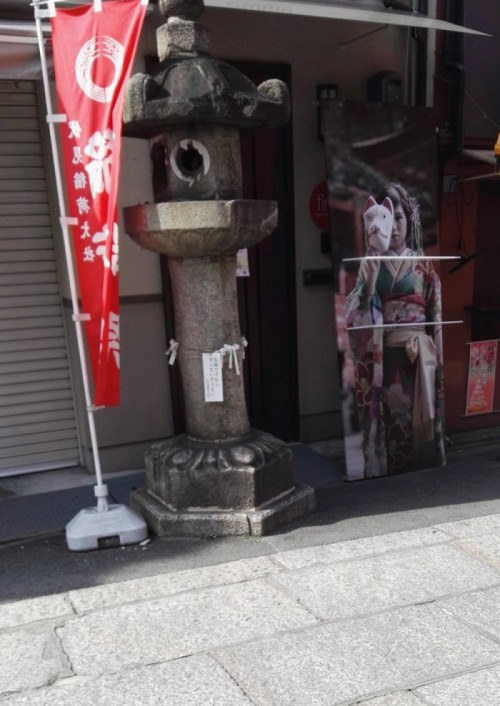 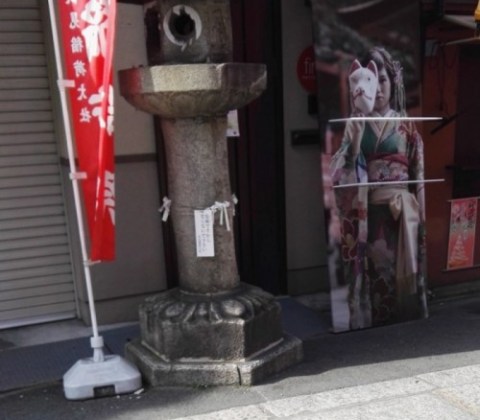 The main shrine that meets you at the entrance is nice enough, with its stark red color and golden ornaments. But this is Kyoto, a city with hundreds of spectacular shrines and temples, and the main attraction is not the shrine itself but rather the pathway that starts behind the shrine.

When I went behind, with seemingly endless arcades of vermilion torii (shrine gates) spread across a thickly wooded mountain, this vast shrine complex looked like a world unto its own. Thousands of torii shrine gates in front of me – feels like entering the world of Japanese mystery.

In some places, the gates stand so close together that even the sunlight has a hard time getting through. They form a glowing red tunnel that winds itself up to the narrow mountain path. 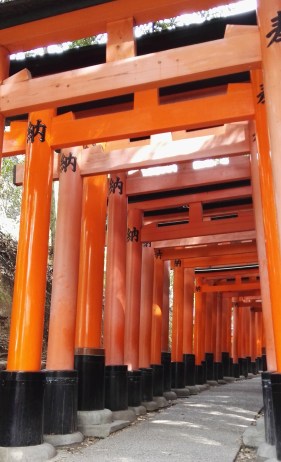 Over the centuries, as Japan slowly transformed itself from an agricultural nation to an industrial one, the shrine became important for providing luck in business. Each one of the over 4000 torii gates that line the way has been donated by a Japanese business to ensure their luck. The oldest torii gates are from the 8th century, and new gates are constantly added. 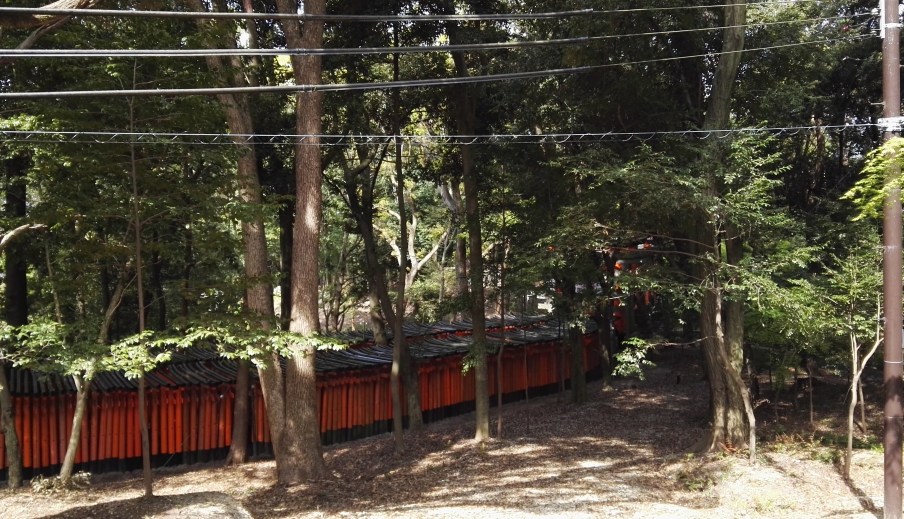 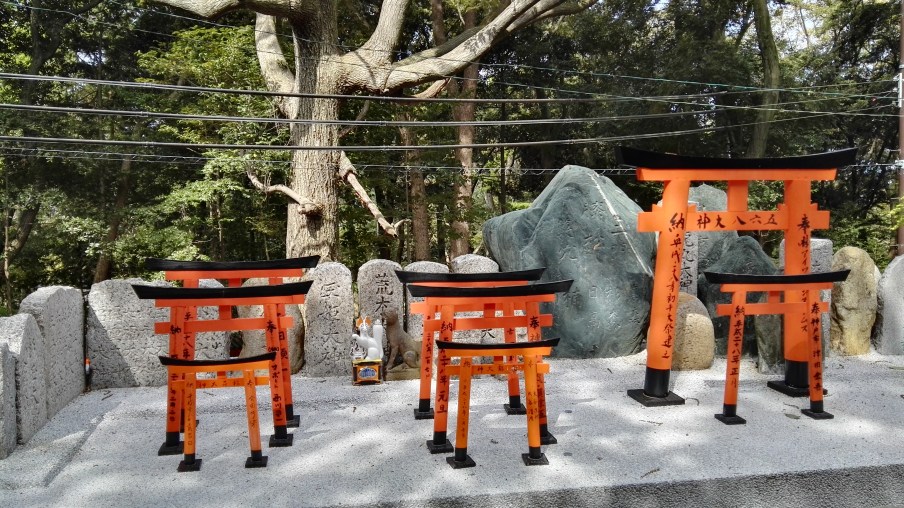 Along the way, plenty of stone statues depicting foxes could be seen. You don’t have to be interested in Japan for very long before you stop and wonder: What’s up with all the foxes? Are they good or are they bad, why are they so important, and why are they in my udon?

All foxes have supernatural power. There are good and bad foxes. The Inari-fox is good, and the bad foxes are afraid of the Inari-fox.

Precisely because of fox-related stories that Japan is hiding, I’ve separated this temple from a special post. 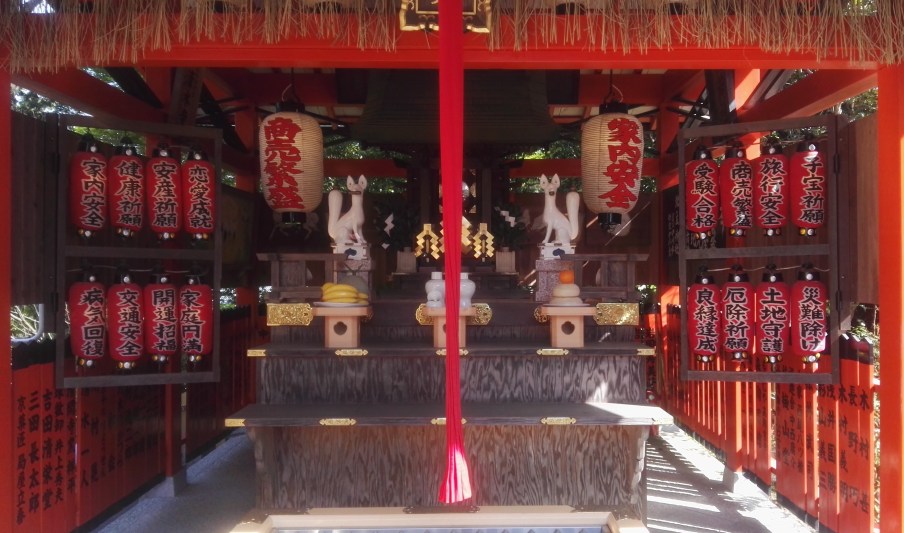 Foxes are so prominent at Fushimi Inari because Inari, the Shinto god of rice, is believed to communicate with humans by using foxes as his messengers. Due to this, there are hundreds, if not thousands, of different fox statues throughout Fushimi Inari. They always appear in pairs: one fox has a sacred jewel representing the spirit of the gods in its mouth, the other has a cylindrical object which represents the key to the rice storehouse. 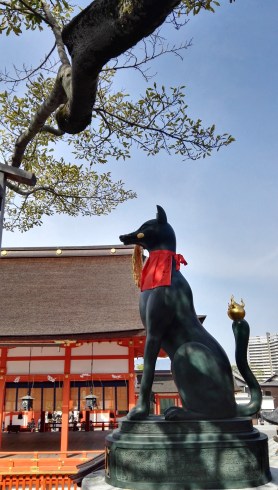 Today, the stores leading to the shrine have every imaginable trinket, toy, amulet, cake, and a cookie made to resemble foxes. The association doesn’t end on the shop shelf though, eateries sell delicious fox-related foods (don’t worry, it’s not a real fox thing. I have never heard about fox meat as a popular item anywhere).

But still, why foxes? One legend says that a handsome male fox and his attractive mate visited the shrine so frequently that local people believed them to be messengers of the gods, and enshrined them there. Another tale says that a pair of foxes were often seen romping in a nearby rice field. Their playful union produced a healthy litter, a sign of fecundity for the farmer who had watched them over the spring months. Soon an association between foxes and a good rice harvest was born.

The simplest explanation seems to be that rodents eat rice, foxes eat rodents, so foxes could have been seen as protectors of rice. But some of the associated beliefs have no such rational explanation. Take the fact that worshippers at an Inari shrine will commonly make an offering of lunch, those thin slices of fried tofu with sweet soy sauce flavoring. It’s supposedly the favorite food of foxes. That’s why udon (a type of thick wheat flour noodle) with fried tofu topping is called kitsune udon, and fried tofu pockets stuffed with sushi rice is inarizushi. 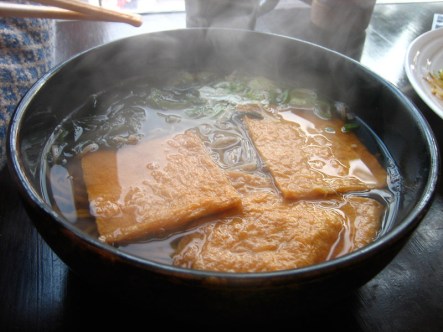 On an incidental note, the Japanese traditionally see the fox as a sacred, somewhat mysterious figure capable of ‘possessing’ humans – the favored point of entry is under the fingernails.

In Japan, the fox is a legendary creature with supernatural powers for doing both good and evil. Able to transform into human shape (typically that of a bewitching woman), and to hear and see all secrets of humankind, the fox is Inari’s messenger.

Kitsune, or fox, grow in power as they age. After a century, they grow a tail and gain the ability to shape-shift and possess people. The most powerful foxes are those who reach the grand old age of 1,000 (the so-called nine-tailed fox). When a kitsune gains nine tails, its fur becomes silver, white, or gold, and it gains the power of infinite vision. 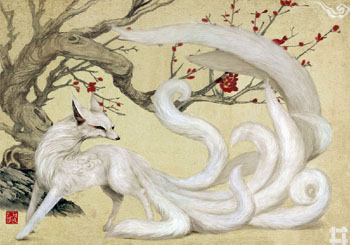 The fox isn’t the only animal yokai (Japanese name for the ghosts and phantoms, or other mystical folklore creatures that inhabit atmospheric stories of ancient traditions, to the contemporary production) that can shape-shift, but they have a special predilection for appearing as a beautiful woman in order to deceive human men. Oddly, in this case, they don’t always have bad intentions. As Lafcadio Hearn tells it: The fox does not always appear in the guise of a woman for evil purposes. There are several stories, and one really pretty play, about a fox that took the shape of a beautiful woman, and married a man, and bore him children—all out of gratitude for some favor received.

Luckily, there are ways to tell that a person is really a fox in disguise. The tail is a weak point – reflections in a mirror or pool of water may show a tail, and young foxes that are less experienced at the illusions may have trouble concealing their tails. Shadows may also reveal their true nature – a shadow falling on water shows the true shape of the fox.

Another trouble foxes have is speaking convincingly like a human. A fox cannot pronounce a whole word, but a part only. Supposedly “moshi-moshi” (It’s how you start a telephone call in Japanese) was a particularly difficult tongue-twister for them, so unless you want to be mistaken for a fox, make sure you never say “moshi” just once.

For those who want to read more, here is one more story:

This story is the first known Japanese fox tale. Written by the monk Kyoukai in the late eighth or early ninth century, it gives a charming folk etymology for the word “kitsune”.

In the reign of Emperor Kinmei (510-571 ad), a man of Mino province set out on horseback in search of a good wife. In a field, he came across a pretty and seemingly responsive girl. He winked at her and asked, “Where are you going, Miss?” “I am looking for a good husband,” she answered. So he asked, “Will you be my wife?” and, when she agreed, he took her to his house and married her.

Before long she became pregnant and gave birth to a boy. At the same time, their dog also gave birth to a puppy. This puppy barked constantly at the mistress and seemed fierce and ready to bite. She became so frightened that she asked her husband to beat the dog to death. But he felt sorry for the dog and could not bear to kill it.

One day, after she went to the place where the servants were, the dog, seeing her, ran after her barking and almost bit her. Startled and terrified, she suddenly changed into a wild fox and jumped up on top of the hedge.

Having seen this, the man said, “Since a child was born between us, I cannot forget you. Please come always and sleep with me.” She acted in accordance with her husband’s words and came and slept with him. For this reason, she was named “Kitsune” meaning “come and sleep”.

Slender and beautiful in her red skirt, she would rustle away from her husband, whereupon he sang of his love for his wife: 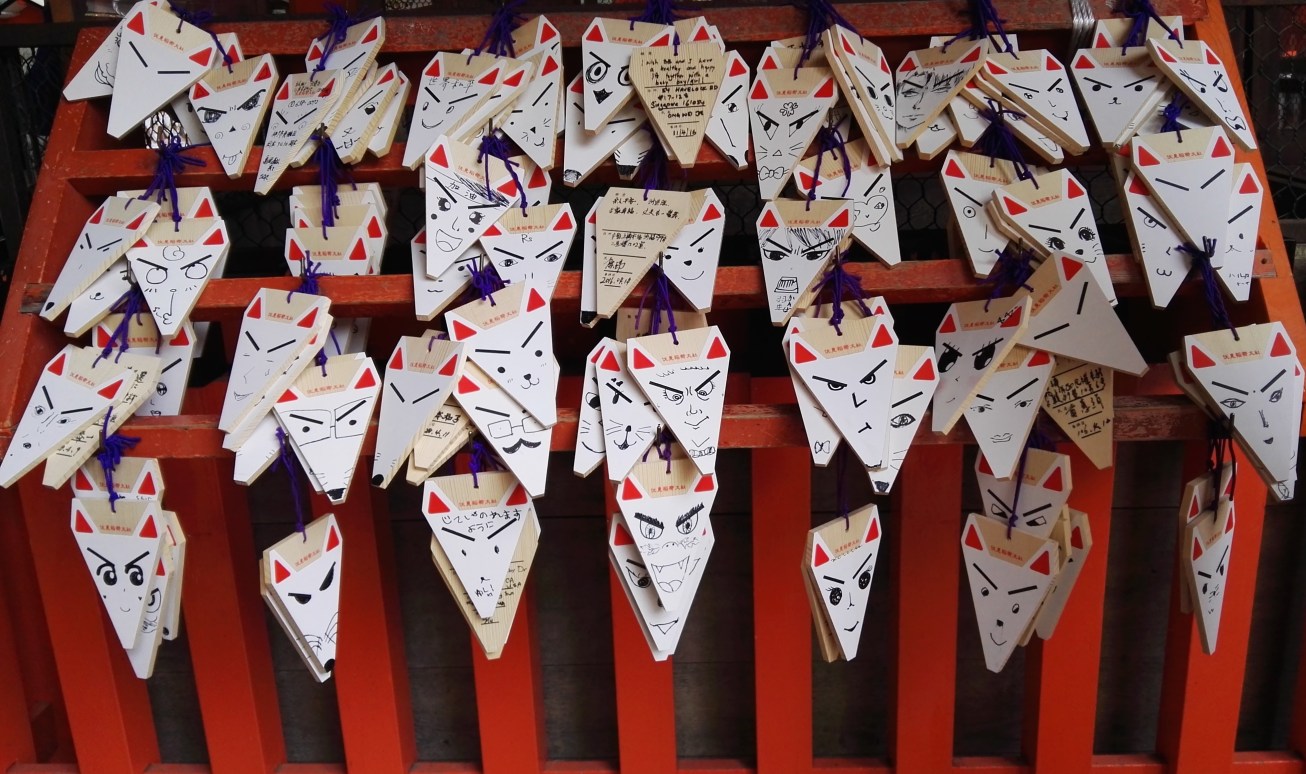 Note: You see/hear this word often when you cook.

= Kitsune to Tanuki no bakashiai.
= to outfox each other (When sly people are trying to trick each other)