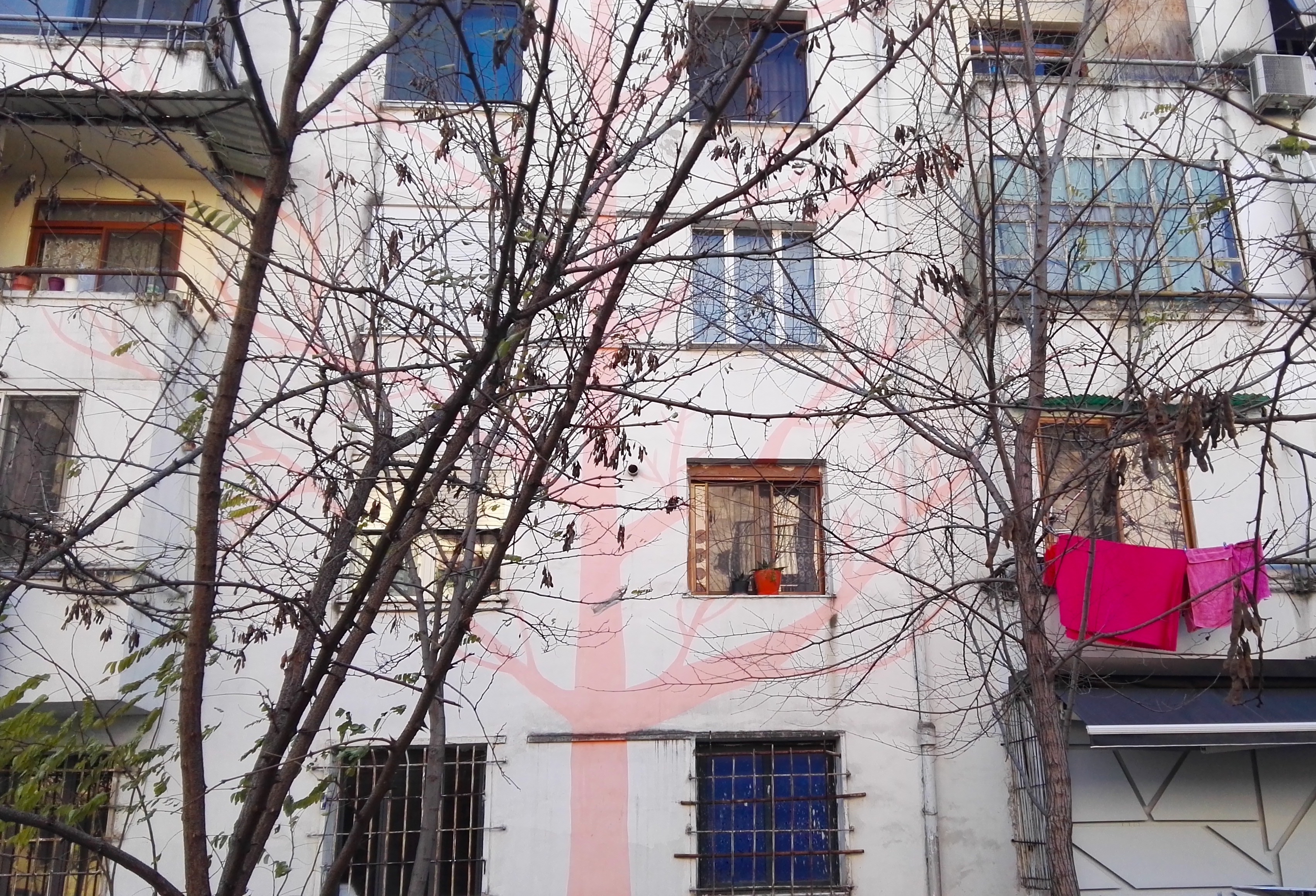 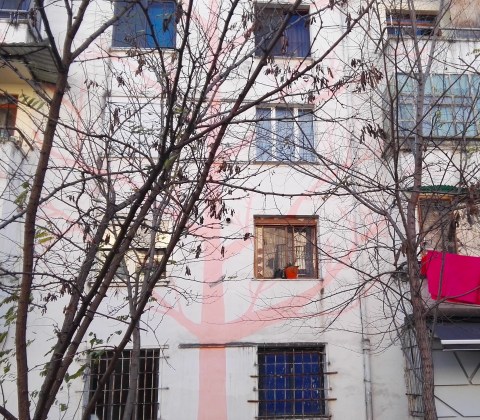 When we left Tirana that afternoon, M. asked me:

And the city of contrast. Elegant and riotous, drab and rainbow. The quirky city with its massive construction projects, a wild mix of colorful communist buildings. 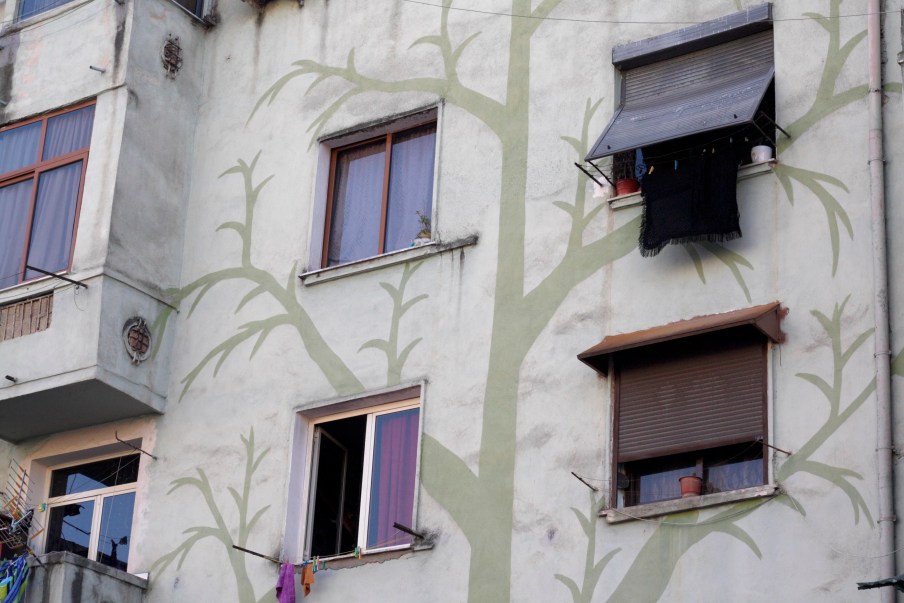 How did we decide to sightsee Tirana? Just by wandering around and letting ourselves be flooded with colors. 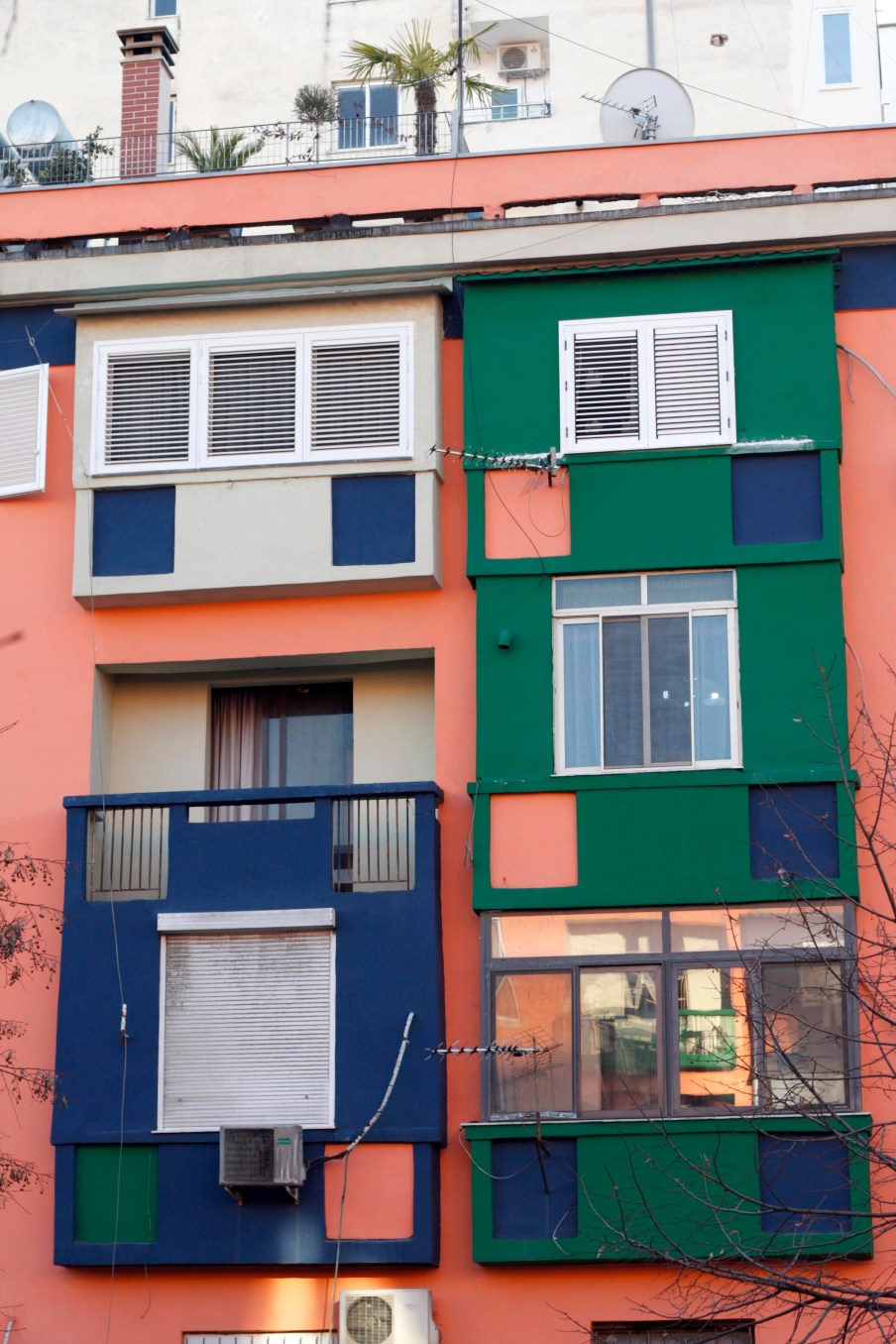 All of these communist-era buildings that were painted in bright colors are looking like a symbolic act of defiance against the former regime. And that is what they really are. Living, breathing social experiment. The cheerfulness of the art and color stood out against the dreariness of the weather and further redeemed the city.

However, during this colorful walking tour among violet, crimson, aquamarine, spearmint facades, we walked through all the city neighborhoods, getting lost among markets, small grocery shops, Minarets, and Orthodox churches, and chaotic traffic jams (it is like in some video-game, as M. explained), where you can clearly capture the rough-and-tumble, gritty air of post-communist desperation that still hangs heavy in Tirana. 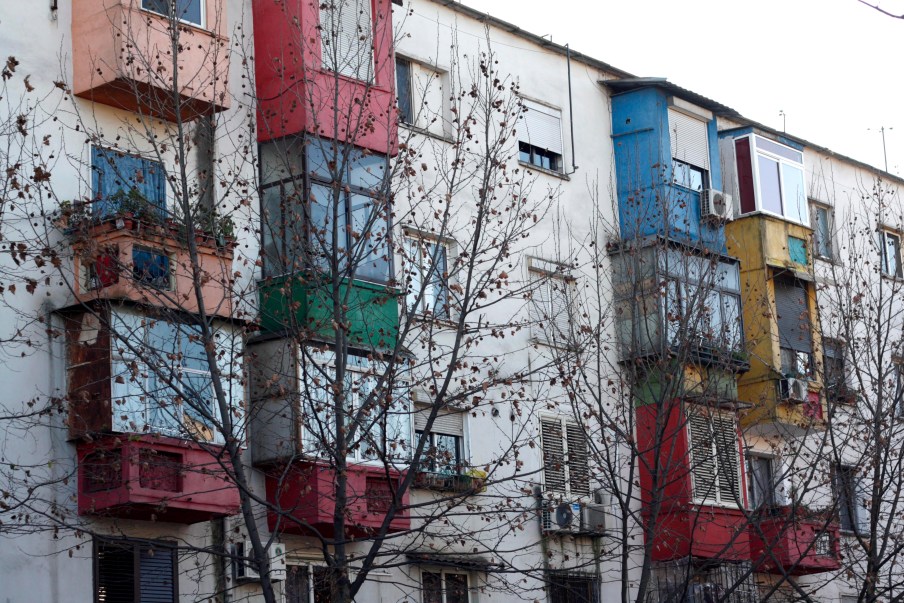 So, who took the city as his own coloring book and filled it with his favorite colors? 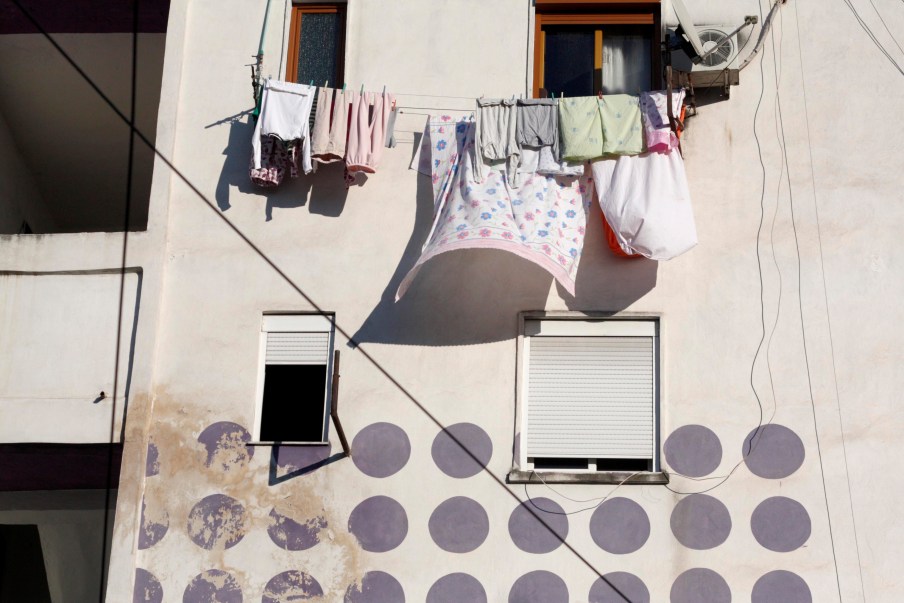 After he won the elections for the mayor of Tirana in 2000, Edi Rama, an artist, and a painter, unleashed his imagination and designed the most extraordinary combinations of shapes and color ever possible. He ordered a kaleidoscope of wild colors and dispatched an army of painters to canvass city buildings with bizarre geometric patterns. 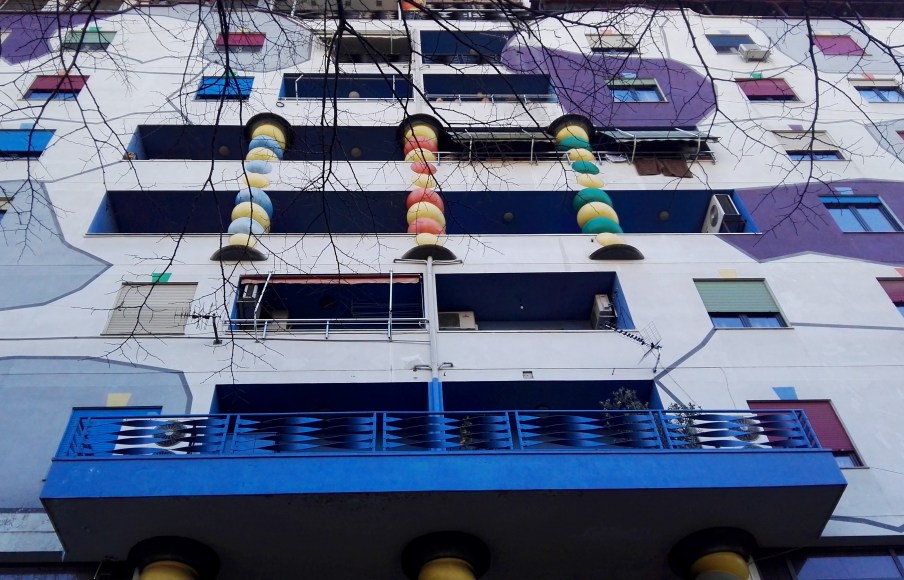 Not every building received such treatment, but enough of them are now scattered throughout Tirana to impart a sense of levity and playfulness to what once were depressing communism monsters smothered in dehumanizing shades of totalitarian, soul-shattering gray. He tried and succeeded in making Tirana totally unique place.

(Worth mentioning: Rama also installed streetlights, although in some parts there are still missing!) 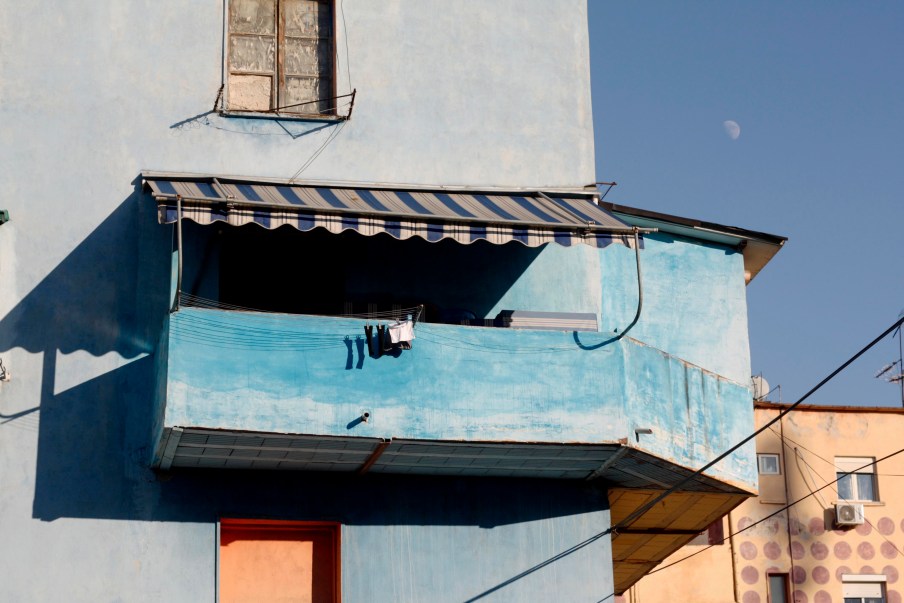 Now, most of the colors across the city are looking like they might come off in the next rain.

What was I wondering all the time is – could residents say in which color they want their building to be painted? The answer is clearly – no. One day they simply woke up to see that they were now proud tenants of a pink apartment block. Imagine somebody just coming and painting your home whatever color they wanted. 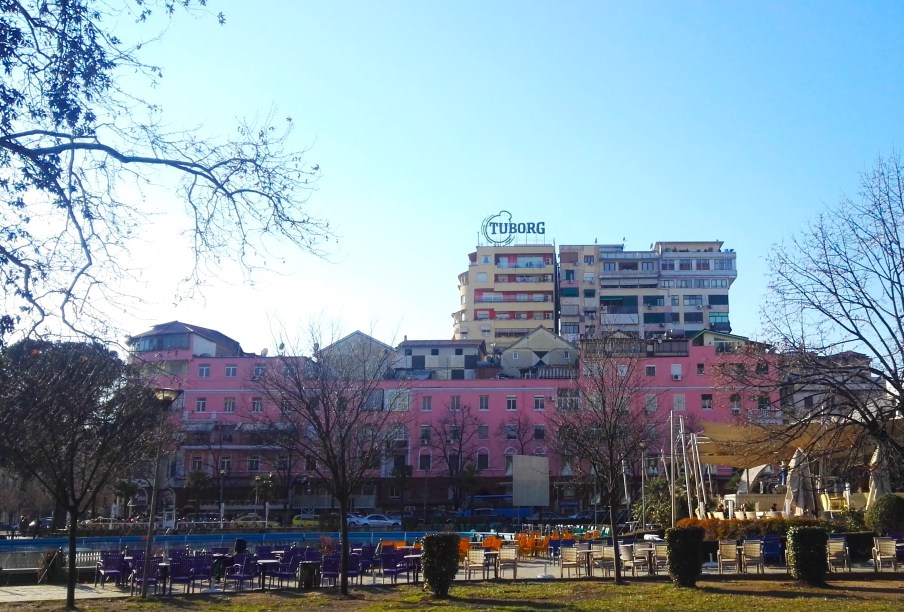 However, they won`t be painted again. As most people were not in favor of it in the first place, there is not big plush to paint more.

PYRAMID – The byproduct of the marriage of communism and nepotism. Designed by former dictator Enver Hoxha’s daughter in 1988, it was so unique in its horrendousness that I almost liked it. 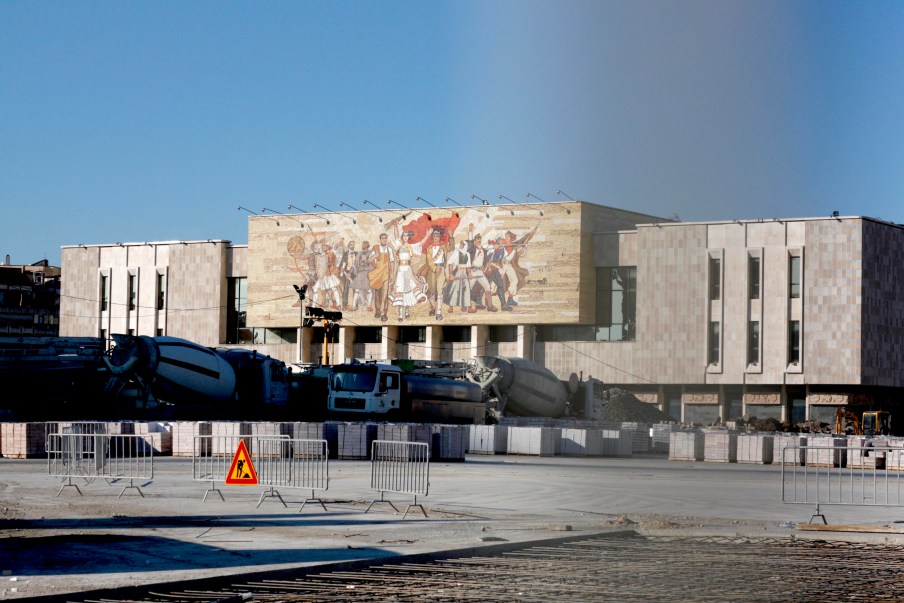 Ah, yes. The communist mural. Once such an integral part of every communist city’s landscape, this mural is pretty much all that remains from Albania’s half-century stint in the socialist camp. Hanging above the entrance to the National Historical Museum in the central Skanderbeg Square (I could perfectly imagine some communist military parade over there), the mural dominates the center of town. Communism may be dead, but its spirit lives on in thousands of tiny bits of colored hodgepodge architecture.

In the end, take a look over Tirana`s yellow minute (in Montenegrin we have one condition – so-called “yellow minute”- a moment of lost control over yourself). 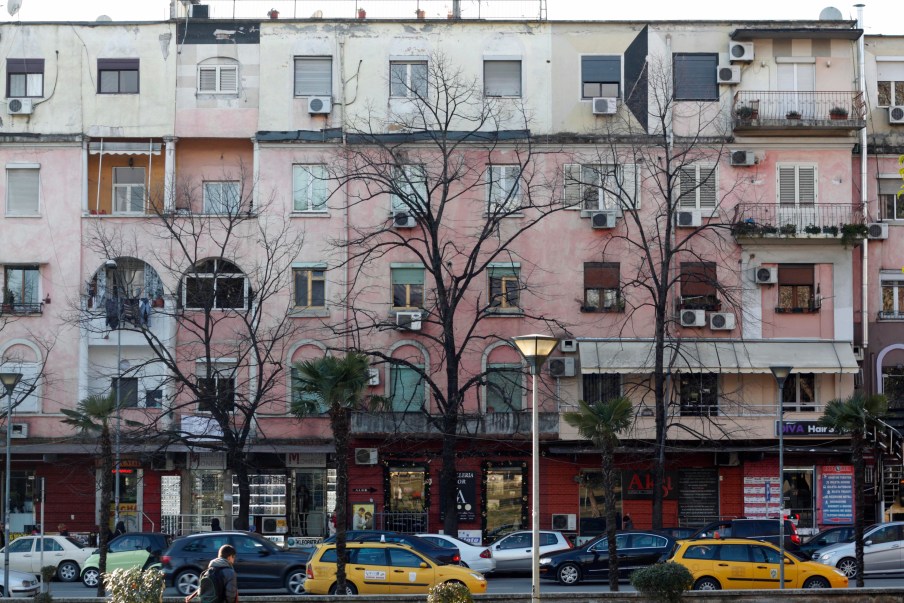 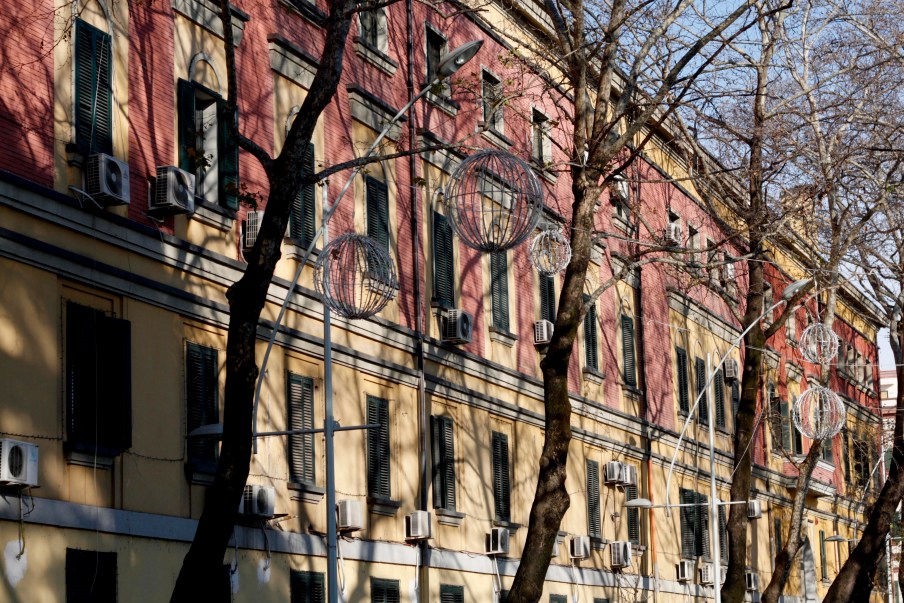 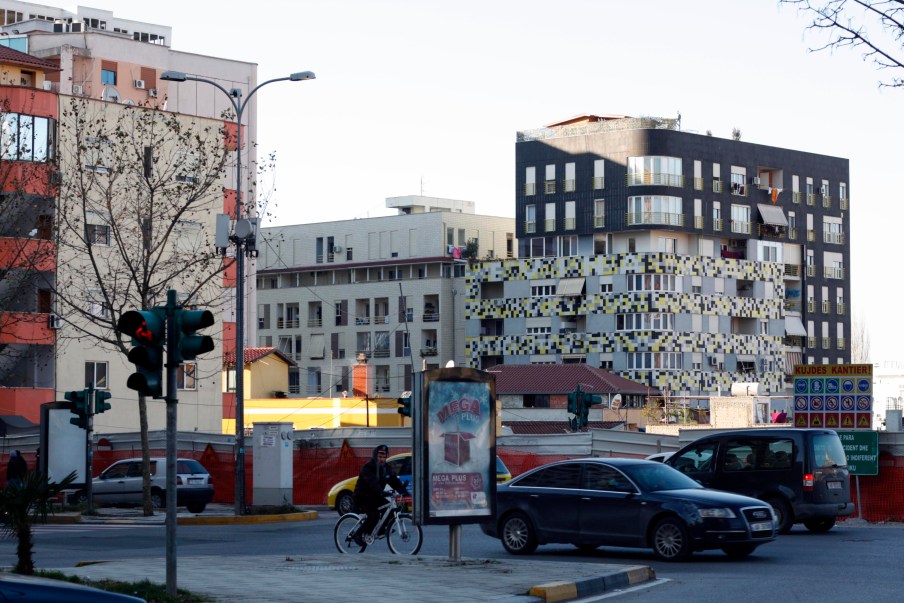 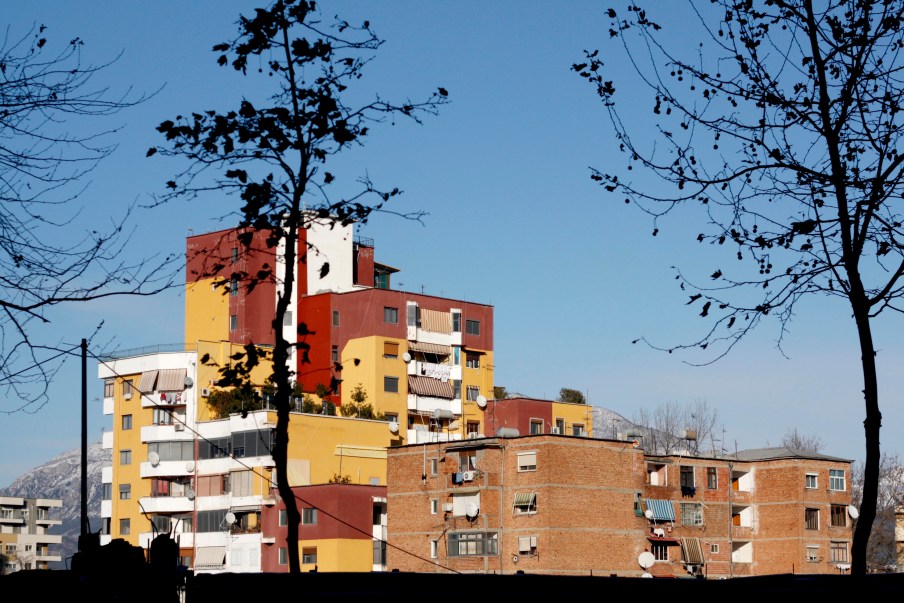 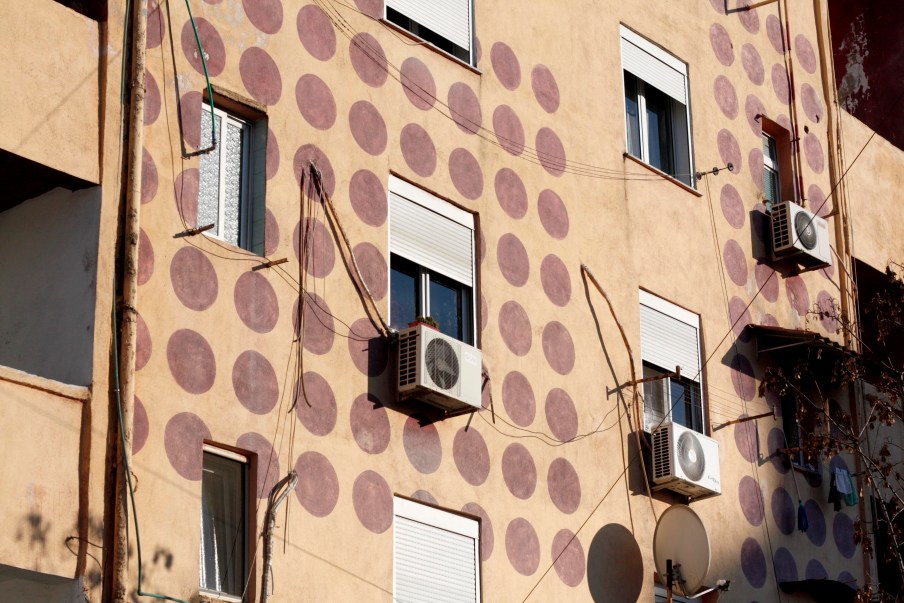 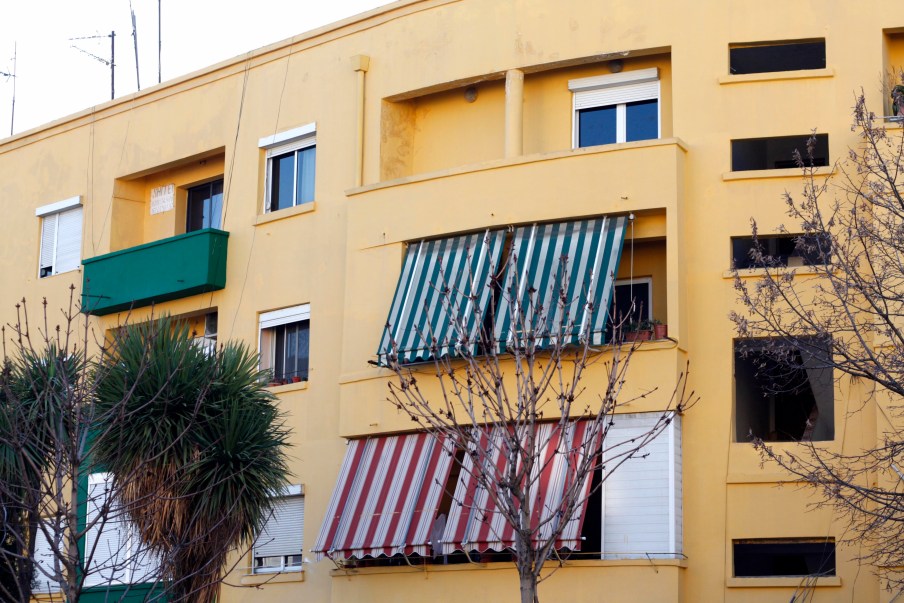 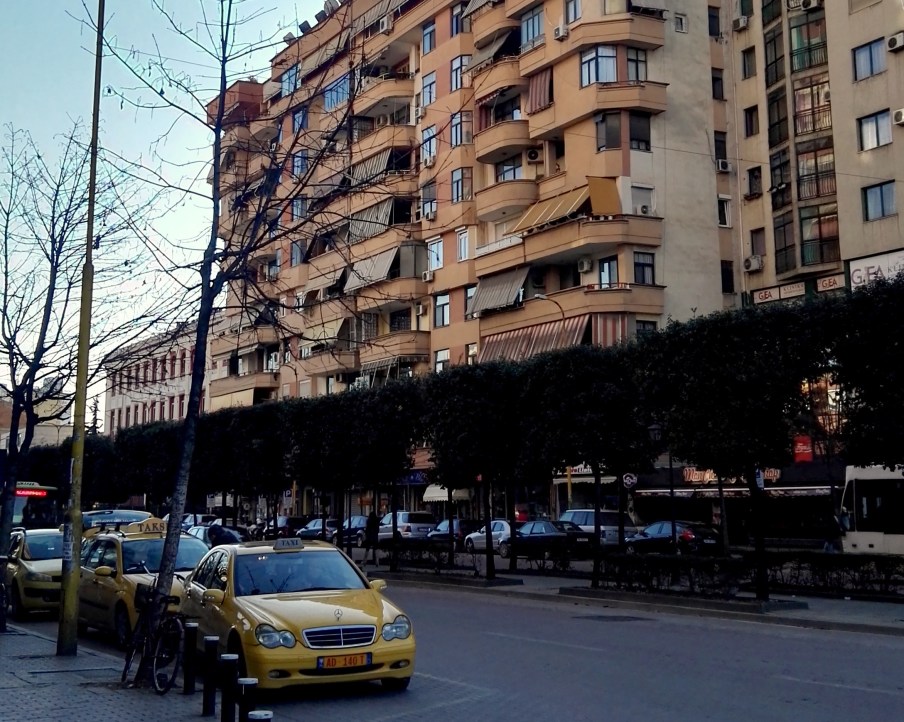 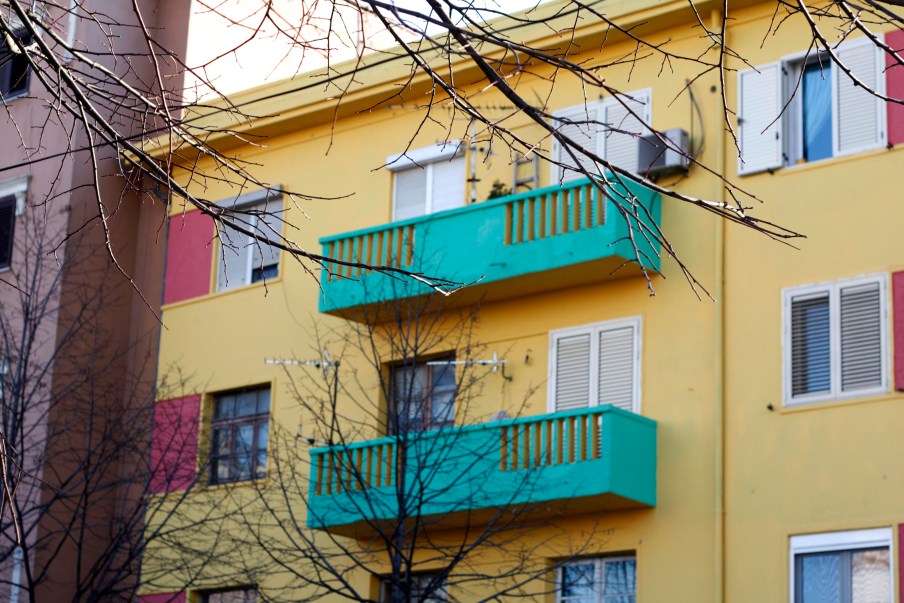 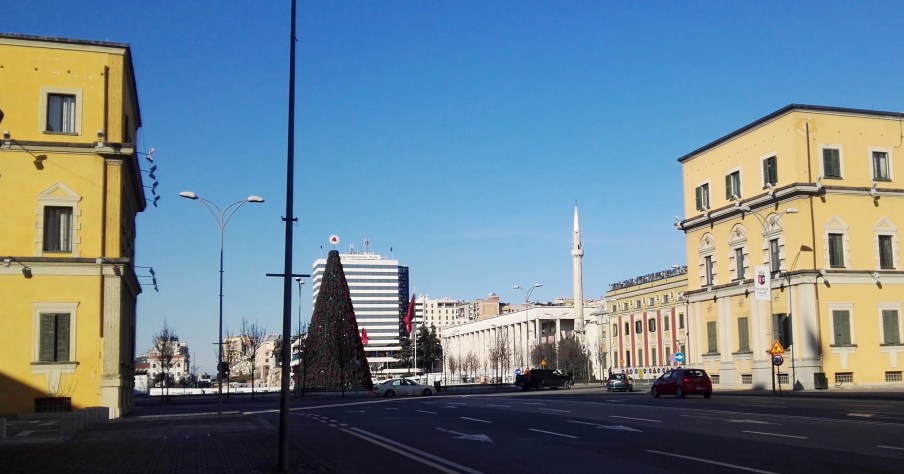 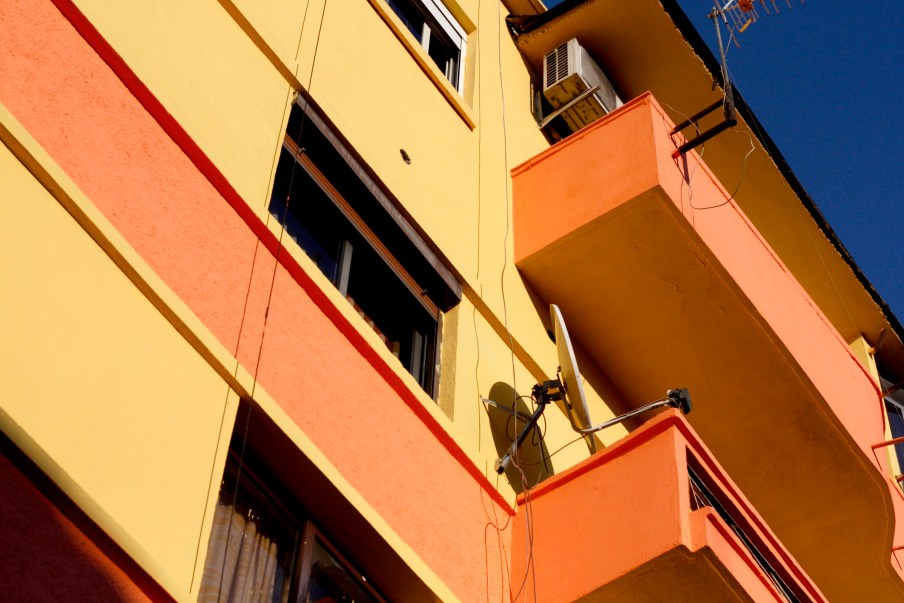 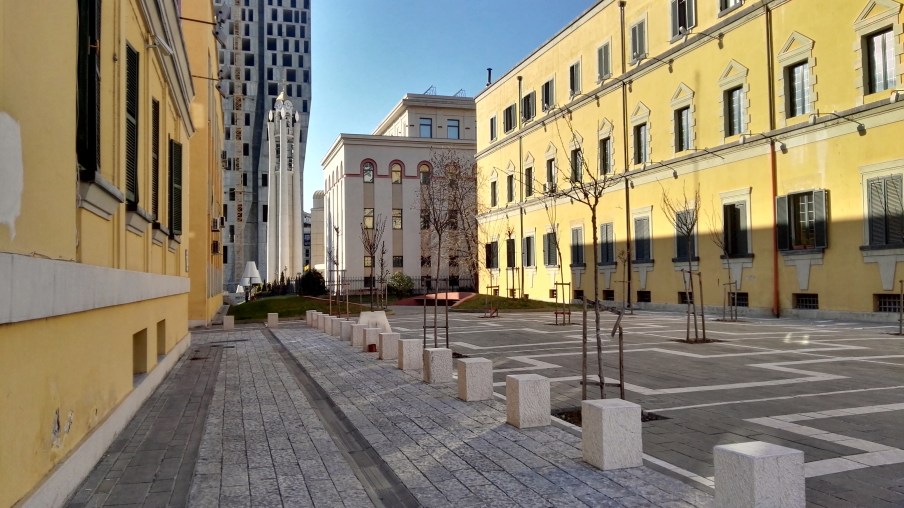 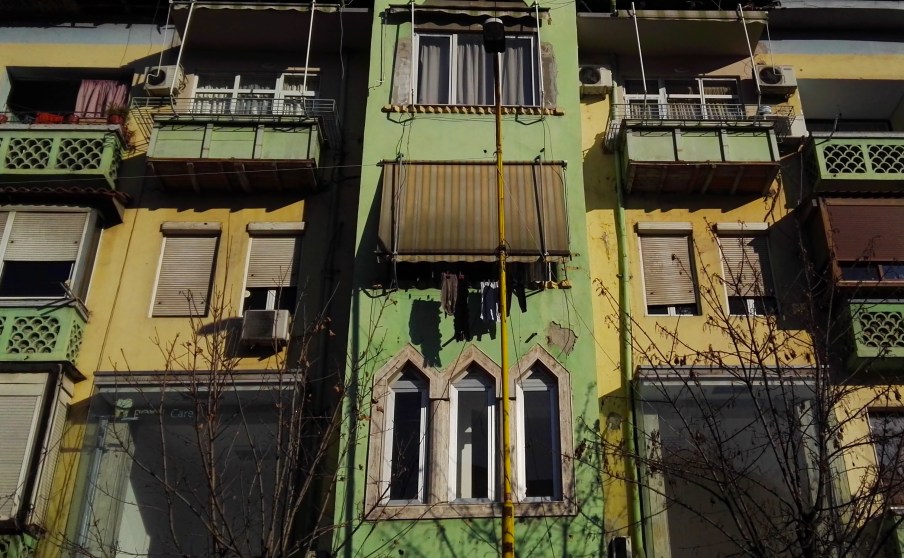 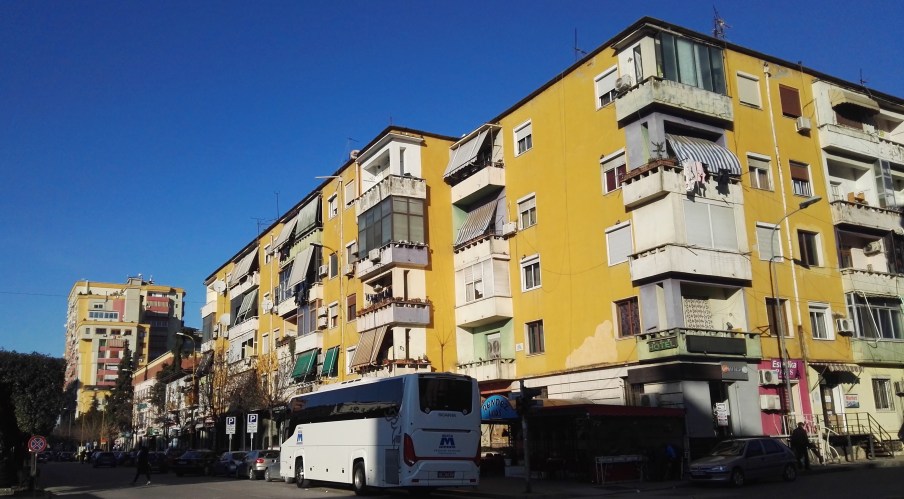 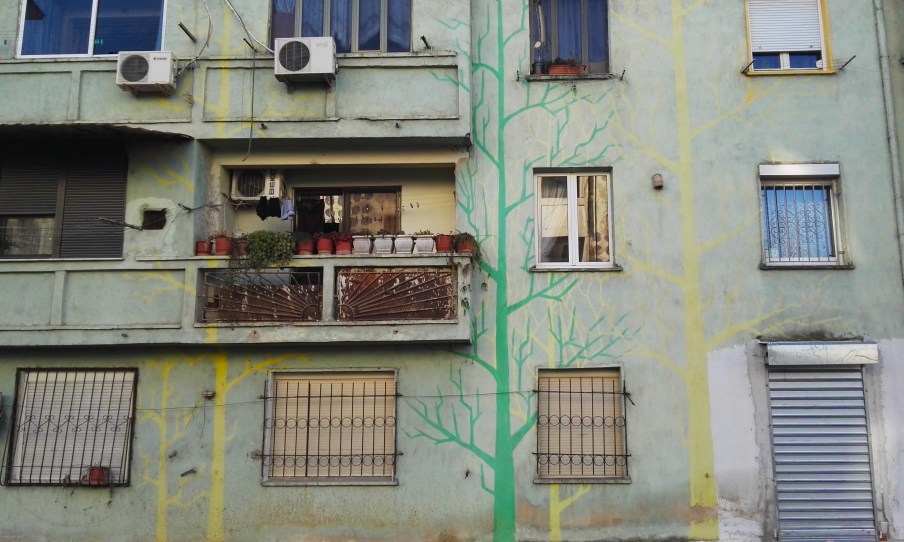 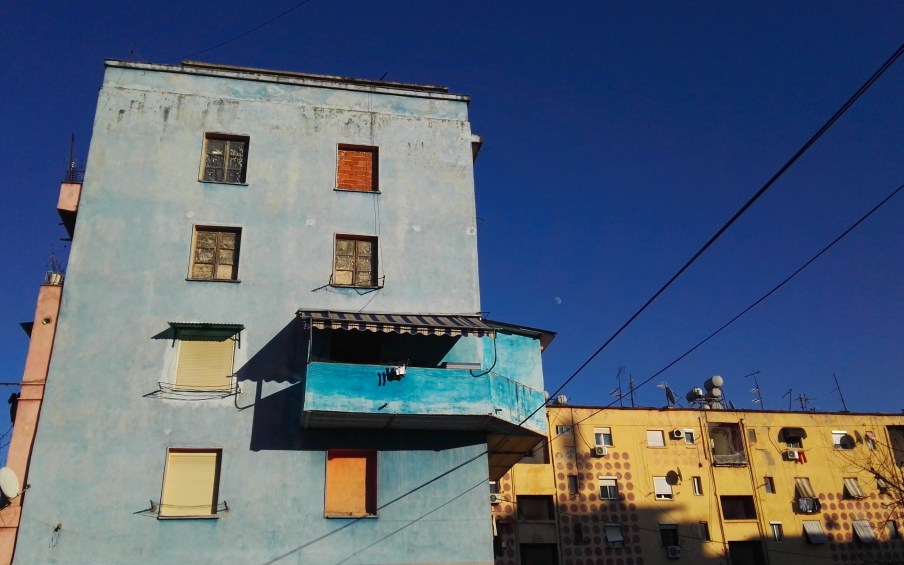 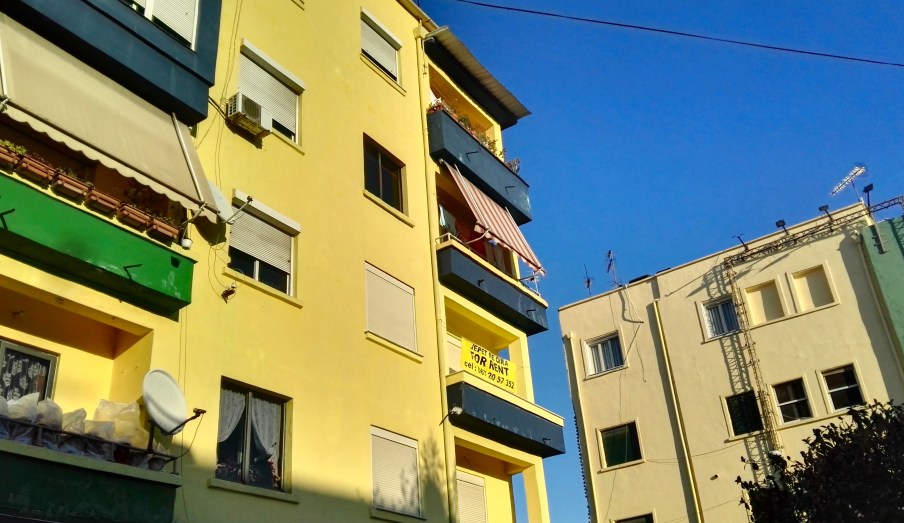 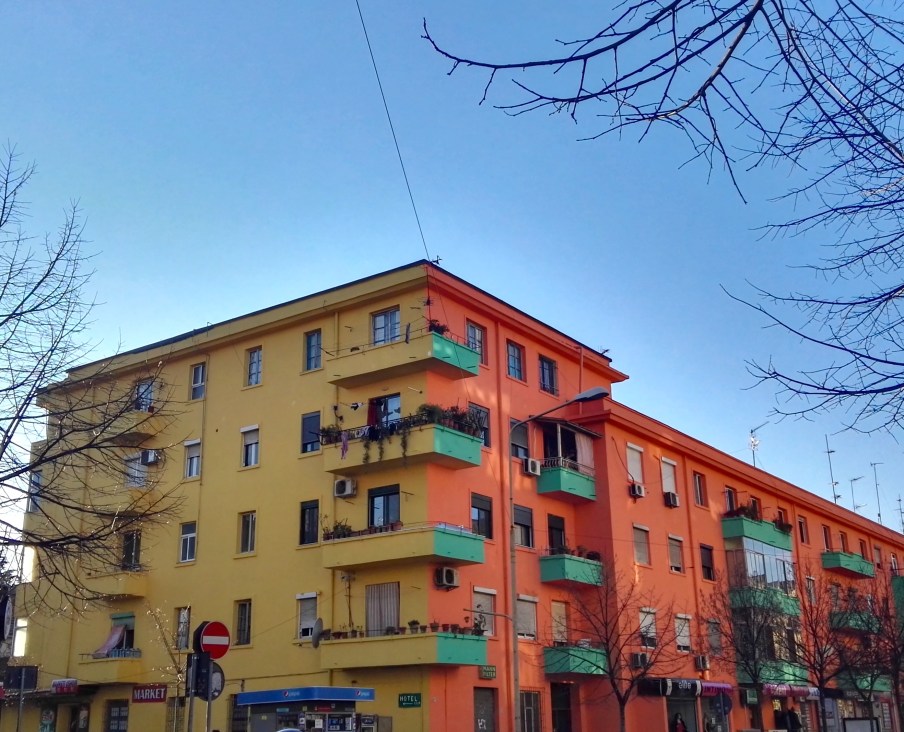